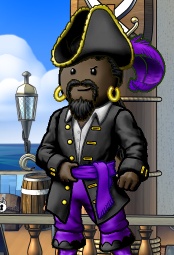 Pennsuedo, aka Penndalla or simply Penn to his mates, was once the biggest name in all of Puzzle Pirates. Originally starting out in alpha-testing as a member of the The Salty Mouthfuls, it didn't take him long to create one of the most famous crews in YPP history—the Rudder Lubbers. This crew spawned a range of spinoff names, such as the Rudder Duckies. When the flag mechanic was begun, Pennsuedo and his mates joined with Uzi and her mates from the Orange Revolution to create the Rudder Revolution flag.

When islands first became available for taking, Pennsuedo organised a massive flag initiative to sail commodities to Gaea Island in the Emerald Archipelago. It was a race with the other major flag at the time, Old Spice—who took Guava Island—to have the island built up first. Old Spice won the race, but Rudder Revolution filled the history books with their immensely popular Gaea 24-hour bashes, that they ran twice during Azure.

With the advent of the Midnight Ocean, Rudder Revolution was still a force to be reckoned with. Uzi split her mates back out of the flag, and when islands were opened up for blockading Rudder Revolution joined forces with Woody's flag Hell's Outcasts to form the flag Equinox. Unsuccessful in their first few blockade efforts, they finally took the island of Guava Island in the Emerald Archipelago.

Pennsuedo is known for his fiery temper and his inability to suffer fools lightly. He had political skirmishes with the likes of Vixen, Rifkind, and Fronsac before settling into his long term feud with the equally angsty monarch of Crimson Tide, bad boy Thanos. He and Thanos were responsible for the first use of the war mechanic.

Penn did retire for quite a while, but has recently returned to the game to found the crew Keel Appeal and the flag Broadside Thrillride. Whether he will reclaim his position at the forefront of ocean politics, only time will tell.