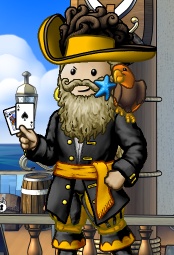 Excal, a wandering pillaging pirate, is a Senior Officer of the crew Privateers, who joined the Puzzle Pirates community on Saturday 5/4/08.

Career At A Glance

After a while of floundering about in different crews, Excal stumbled across Missing Link from the flag Black Moon. Excal joined and made friends with Mastrix, the captain, and Hddw, a senior officer. Rising through the ranks to officer, Excal learned many things, trained in many skills, and earned many PoE. After a week, Excal decided that a more lucrative job would be found in a different crew, and therefore joined Lex Gabinia, captained by Ladymelo. Once again, swiftly undergoing officer training, he was promoted to officer.

After spending nine months in the crew, and leading countless War Brig pillages, Excal decided it was time for a change. After much deliberation, he parted from Lex Gabinia, and joined Privateers on 29/12/08. This change, Excal felt, was for the best, and indeed it turned out to be. Within two days of being in the crew, Excal had raised his Battle Navigation from Respected to Grand-Master, and had made many new friends. Excal has been pillaging on the seven seas ever since.