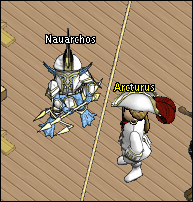 Dragoons are NPPs which may board a player ship during an Atlantis attack.

The primary purpose of a dragoon is to challenge individual players to a 1v1 swordfight, or start a multi-person fray very similar to skellies. One key difference is that an additional piece, the aqua trident, is added into the swordfighting puzzle. No matter what color the trident is, the aqua pieces remain in the same location in the drop pattern.

If the dragoons are not repelled, eventually enough dragoons will board the ship such that the number of dragoons matches or exceeds the ship's crew. When this happens, the following message is displayed in the chat window, and the entire ship is thrown into a ship-wide fray:

"Yer vessel be overrun with dragoons! All hands join the fight to save the ship!"

If the crew loses the takeover fray, the dragoons will commandeer the vessel and the vessel is lost forever. This is similar to a ship sinking in Atlantis, and players may receive an injury or fish. All players aboard the ship when it sinks will also see the following message:

Note that ships which dragoons have commandeered can be salvaged from the deep in the same way as other sunken ships.

Dragoons will taunt the players based on who has the advantage in a fray.

"You alone defend this vessel of wood and iron? It shall soon belong to the people of the sea."

"Your insignificant numbers would inspire pity if I weren't already overwhelmed with disgust."

"Fear not the Triketos, the Gorgonyx, or the Archelon: you shall not survive long enough to be destroyed by them."

"With this many of my brethren, I could tie one fin behind my back."

"Our eldritch techniques will overcome these odds!"

"You may feel confident with your superior numbers, but do not forget to factor in the number of tines per trident."

"The drylands must be overfilled with your kind. We will not rue thinning the numbers."

The following trophy is related to dragoons:

Originally named Saboteurs, the name Dragoon was released to Ice on 2007-08-24.