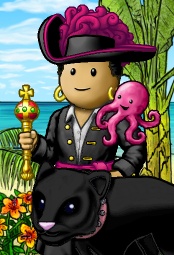 Jimmy's career began in 2005. He is an active puzzling captain on the Emerald Ocean, where he maintains the crew Taste the Rainbow, flying the flag of Proud To Love. His favorite puzzles are Battle Navigation, Swordfighting, and Carpentry.

Jimmy's career began for a short while on Cobalt in mid 2005, but quickly transferred over to Sage, where he took the name Jamy. He was a cabin person and worked his way to Senior Officer of Hardcore Sea Ravers, under Evilard, who was also at the time King of Hardcore Explorers. Jimmy later moved to Hunter right at release, where he was able to grab his name of choice. He continued his work with Requited Desires through the blockade for Pukru against The Eye, which depressingly ran from 2-0 to 2-3, where the flag later saw its inevitable demise.

Jimmy continued to work outside of RD with Deathsenemy, Faeviolet [et all] with Varsity, but was later banned in 2006 for a silly TOS-breaking endeavor. His history then got a bit shady as he made new pirates on Sage and Hunter, unbeknownst the eyes of OOO. Other pirate names included Gluba [Hunter], Jimae [Sage], Jimmy [Malachite], and Jimmy [Opal].

Fear not, for Jimmy's guilt consumed him and, after 3 ban appeals, he paid his dues and was able to reclaim his original account, where he continues to play today. Find him at a swordfighting table!