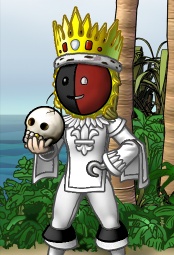 Zelnok washed up on an unknown island around January 2007 and was quickly spotted as a cabin person who liked to gun. In fact, because of this, she quickly subscribed and moved up to officer and then first mate in the Grandson's of Dragut under the watchful eye of Kemalreis. Leaving on friendly terms she and a group of officers created the crew Alere flammam Veritatis and the flag Veracious Tenacity. She is quite often in the ocean-wide top ten in battle navigation and has a penchant for rumble and shiny things and has taken up drinking when she isn't venturing into the cursed isles.