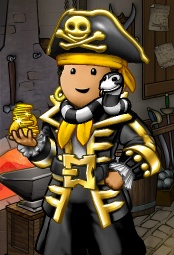 Zakilla joined the game in August 2006. He likes MMORPGs which is why Puzzle Pirates first caught his eye on Miniclip.com so he decided to give it a try, not knowing it would become a passion of his for over 5 years. He liked to play on the Hunter Ocean prior to the ocean merge and now can be found on the Emerald Ocean.

His first crew on the Hunter Ocean which he created was called Black Tide. He had 2 first mates in this crew. One was Piratearjb and the other was Tazmanian. Together the three of them made plans to try and make a big impact on the Hunter Ocean. Together they created a flag called Black Tide Mafia. The flag they created grew very quickly and at one point it had over 1000 members and was in top 5 fame.

Things started to fall apart after that when they were convinced to go to war with a fellow flag. They lost 3 war frigates in that war and because of that many members left flag including its founders Tazmanian, Zakilla and Piratearjb (who would never return to playing the game). Tazmanian and Zakilla eventually came back to the game. Zakilla made another crew and flag from scratch with the help of Tazmanian. But eventually he decided to go on vacation from game again. For about a 2 year stretch he barely played the game. When he did decide to start playing frequently again he tried being a senior officer in a crew rather than the captain. But deciding he didn't like being second in command, he proceeded to create his own crew and flag again.

At one some point he tried blockading Lowland but lost. Then he started a flag partnership with Detail, in which they shared a flag, then together they tried blockading Lowland again and lost. Finally, he joined No Quarter Given with Wenchwendy, from an idea and recommendation by his good mate named Flamingship. Together he and Wenchwendy helped No Quarter Given win their second island. And Zakilla was finally able to get his hands on the prize he had coveted for a long time: the governorship of The Lowland Hundred.

In his free time Zakilla enjoys poker. Poker is one of his favorite parts of the game. He got started on his addiction to playing poker after he started to win a lot. Now poker is one of his favorite things to do and it has helped him accumulate over 150 ships of every kind a lavish estate he likes to share and decorate with his best mates, and lots of familiars that he likes to name Zakilla. He also enjoys Bilging and Battle Navigation.

Zakilla spends the majority of his time dealing with social aspects of the game which now include being governor of Lowland. He is a driven individual who enjoys plotting island takeovers and gathering an ever growing empire of shoppes and stalls.

Zakilla then created his own flag named Your Flag. He proceeded to use his PoE to blockade Alkaid Island. However he won the island from having a pay war with the defending flag Good Luck who was forced to pull out from Zakilla continuously upping the pay. He then used the two week non-blockade period after the merger to drop shoppes out of his island plans without the fear of being blockaded. He was then blockaded and did not defend against No Apologies.