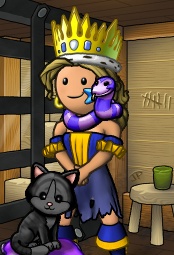 Xtrauma is a pirate on the Viridian Ocean as a captain of the crew Absconditus, and a queen of the flag Royally Screwed.

One of the first crews Xtrauma joined was xXxDarkSoulsxXx, but after the crew dying out due to the captain moving ocean she then moved onto the crew New Beginnings, however after the crew began to grow old she then left and moved on once again...

The next crew to join was one which her good friend was in, Epic Fail. Eventually the captain of the crew couldn't keep up with the costs, so decided to give ownership over via merging.

After being independent for a while she joined Globe Rotters, but after many disagreements with other members of the crew and also the captain becoming inactive... she made the decision to make her own crew.

Her own crew is called Absconditus (Latin for Hidden), it has been running since May 2010 and is home to only a select few friends to keep drama to its minimum.