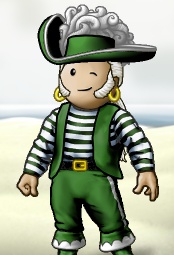 Xarcht is a senior officer in the crew Privateers and a lord of the flag Black Flag on the Sage Ocean. He owns an ironworking stall on Lincoln Island.

Xarcht was a stowaway in the fall of 2005. He pillaged with a couple of crews before Quasar told Xarcht he could aid him in learning the puzzles and asked him to join his crew. He joined Privateers of the flag Go With The Flow without looking back. In a year they took an island and later lost it. He recruited his hearty Jameshook and was promoted to officer.

When the captain went dormant, Xarcht attempted to keep the crew going by aiding Hamm in becoming the temporary captain. As Go With The Flow disbanded, Xarcht was again faced with the responsibility to try and keep the crew together. Black Flag was created and has since lost and gained good crew mates. It has been Xarcht's job to be a guide to the new recruits and also give consensus to the higher ups in the crew.

Xarcht has been offered many opportunities to change crews, but he considers Privateers his home.