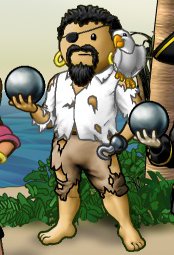 The controversial Whitefire is perhaps most famous (or perhaps infamous) for the 24 Hour Pillage he led, which clearly demonstrated that payouts were booched (and made hundreds of thousands of PoE for the lucky participants).

A blockade enthusiast, Whitefire has been a part of several crews for the purpose of blockading. One of his impressive blockade achievements was the organization of the defenses of Chaparral Island for PAROT. He is currently planning PAROT's defense of Midsummer, due to be opened for blockade November 17th, 2006.

However, he is most known for his stints in Black Death and Fandango Familiars. Though not a founding member, Whitefire has been an active and guiding force in Notorious Fandango since its early days.

A lightning rod of sorts, few who know Whitefire hold a neutral opinion of him. Nevertheless, few can argue against his talents or the impact he has had on the game.