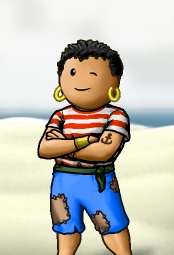 Vanukas is a pirate and he used to sail the Sage Ocean. Nowadays he can be seen on the Emerald Ocean. He is currently a Senior Officer of the crew Poseidon Hawks, and a royalty of the flag The Maelstrom Abyss. He seems to have an ambition for rumbling.