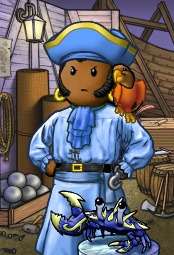 Thetanu is a senior officer in The Code, and royalty in The Bretheren Court. He is playing on the Meridian Ocean and trying to change things.

Thetanu began playing Puzzle Pirates for a half year under the name of Rainforce. He retired with his friend Kamihara. Then last February he and his friend decided to start playing again. His friend Pulsor retired again and pirates are still waiting for his return.

He started his own crew with his mate Pulsor, but as pirates all know he retired. So he left with his mate Ghostvision and started his own crew. That went well for a couple off weeks. They went pillaging and did SMH's, but Ghostvision had not enough time to run the crew right. So he left and started his own crew with Jadephoenix & Tramontane. The called the crew Screaming Vanilla. But Thetanu is lazy, so they didn't went out for pillaging. They joined The Bretheren Court cause Elisaswan asked him to. But they were a small flag and Tramontane rather wanted to join another flag. So they joined What A Ride.

Brucee told Thetanu that there was a event organized by RiddleMakers. The winner would get the island Moab. They decided to participate in the even, and Thetanu began organizing everything. There were 4 flags competing, so they needed to win 2 games. The first game they won easily. The other half-final wasn't played yet. Then Brucee changed plans and said to Thetanu that Moab didn't fit in his plans. So they left back to The Bretheren Court and took there spot in the competition with them. After a couple of weeks the heared from Aethonx that the event had been cancelled. Thetanu wasn't happy with this, but there was nothing he could do.

Pirates don't know what the future will bring them. But he thinks he can say that Thetanu is setting goals for himself. Deadlines to achieve some of his goals. And helping Barhoum so he can achieve the goals. Never backing down before they are achieved.

Thetanu sucks at almost everything, the only things he doesn't scupper up are: Gunnery and Treasure Haul. His ultimate Gunnery trophy is already in the pocket but he's still waiting for that Treasure Haul trophy.