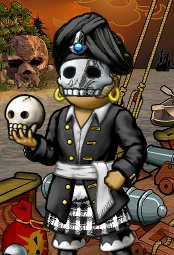 Taiioo is a Senior Officer and First Mate of the Crossbones, he is also Lord of the flag What The Falchion.

Commonly referred to as "Tai", because most people cannot easily remember the number of "i" and "o". An other way to call him is like Pandaeyes say on Shanty Raid-io; T-A-double-I-double-O

Taiioo discovered the game in October 2005, thanks to Jambdeubois which is his Captain since the beginning. One month later he was sub and started to increase his stats to can access to a higher rank.

It is a French Pirate who is very attached to his crew in which he found lots of nice friends and pirates like Jambdeubois, Ladyluck, Vagan, Fastflash and others.