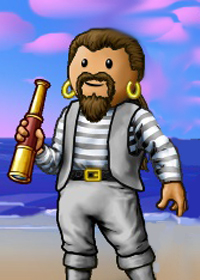 Spuz is a pirate on the Midnight Ocean. He is captain of the crew Keel Appeal and a prince of the flag The Angry Dome.

Spuz began playing Puzzle Pirates toward the end of Azure. At the beginning of Midnight, he and Greasy left Fortune's Fools in search of greater things. They founded the flag No Homers, which at the beginning of Fame was in the top ten flags. No Homers was known through the ocean for participating in several notable blockades, particularly the first three-way blockade at the Islay of Luthien.

Spuz retired for more than a year, but was seen playing again, as a member of the Knights of the Republic crew.