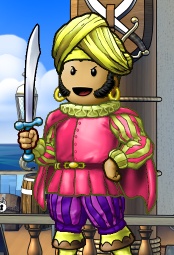 Sefu is currently the captain of the crew Yellow Turbans and prince of the flag Allied Saruyama Forces. He spends most of his time in-game running his shoppes, occasionally pillaging on his war brig the Going Merry, and lastly raking up as much muck as he possibly can on the Sage Ocean.

Known for his proclivity for wearing yellow turbans, Sefu – being too headstrong and lazy to act as a duty puzzler - vainly founded a crew of his own and named them after himself: "Yellow Turban" Sefu. A cantankerous yet always courteous jackanapes, Sefu thrives despite of himself thanks to the wonderful crew mates and flag members who have drawn around him, no doubt in pity.