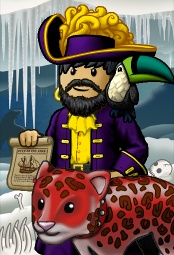 Searching began his pirating career in 2009 and quickly joined a medium sized crew known as Team America. Moving up through the ranks he quickly became fleet officer. After the captain Hailbush was lost at sea for months, Searching finally decided to join Eye for an Eye as fleet officer. Thanks to his endearing flattery of the beautiful captain of the crew he became senior officer. After a few months on a secluded island he returned to the main land to discover the crew, he had fought with for so long, in disarray and decided to create his own crew. Since early 2015 The Crimson Ravagers have caused mayhem and destruction on the high seas. Searching also created the flag The Ravager Vengeance which did not become a powerful flag despite his best efforts. After long consideration Searching decided to join another flag, rather than be a pawn between warring factions. The Crimson Ravagers joined Madcrash and his flag and soon blockaded The Lowland Hundred. After a crushing defeat Searching went into seclusion once more and returned months later to join Crayon Box with his crew. The divergence between the royals of Crayon Box and Searching resulted in The Crimson Ravagers leaving the flag once again. For the next few months The Crimson Ravagers sailed under the independent flag, before joining Lit, the owners of Admiral and half a dozen other islands at the time. Lit changed their name to Pull Out, after numerous successful defences of Admiral, as a suggestion for enemy flags to pull out and accept defeat. Now Searching plots new ways of achieving his goal of domination of the high seas and all islands within.