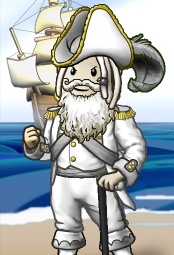 Seabug is captain of Puzzled Seafarers, and lord of Veracious Fairytale.

Seabug started his pirate life as a vagabond, swimming from island to island meeting and greeting everyone and everything. While on one of his exploring adventures out on sea by his own with only the fishes to talk to and alot o salty water to drink he got picked up by a Phals ship, they sat him down in a tight compartment with orders to bilge. He was so taken by this he joined Phals and became a cabin person. He worked his way up to the rank of pirate, and it wasn’t until the warm and loving Deanne (now [[Eternity {pirate)|Eternity]]), that had just taken over the crew The Jolly Rogers, asked him to leave Phals and follow her lead instead he really fell in love with this world full of piracy. It didn’t take long for him to achieve the rank of Fleet Officer and later even Senior Officer and Captain of The Jolly Rogers.

He was married in-game to Whitebelle on September 3rd, 2006

On may 5th 2007 Seabug decided it was time to go separate ways with Eternity and leave The Jolly Rogers to become Captain in Puzzled Seafarers.