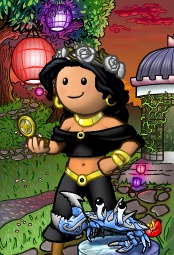 Sculia is a pirate on the Midnight Ocean. She is currently a senior officer of the crew Legally Drunk and a member of the flag Under The Influence.

Sculia arrived on Epsilon Island as a semi-confused greenie, anxious to begin her pirate-y career. She was quickly jobbed into the crew "Heros of the Sea", but found that it was not the place for someone as vivacious (read- talkative) as she. Thanks to a hearty, she moved onto the crew "Let it Be", and was made an officer. She was happy there for a time, but eventually felt the need to move on. Sculia drifted through many different crews, including The Blackwolf Marauders with Mommawolf and Raisin' a Raucous with Raucousred. Eventually, however, Sculia found herself in Legally Drunk under the capable and caring hands of Lawgirl. Sculia was soon promoted through the ranks to the position of SO, and she hopes that she has finally found a home, and can stop crew hopping!

Sculia is somewhat known around Midnight Ocean because of her frequent appearances on Atlantis voyages. Her outspoken personality has earned her numerous good hearties, as well as spots on many people's mute lists. However, to get to know Sculia is to love her!

Sculia has been busy buying pet after pet, including the rat she received as a greenie (unfortunately still named "Rat"), two elephants (Orwell and Nelly), a sheep (Thankee), a cat (Snarf), and a limited edition Stout Hound (Murphy). Sculia was also able to save and purchase a karkinos (Krabbie Roxy).

She owns one sloop, the Unique Puffer, which was a gift from Zenggah for Christmas 2008. It is painted pink and white, Sculia's pirate-y colors.

Sculia is currently trying (unsuccessfully) to save for a familiar, preferably an octopus.