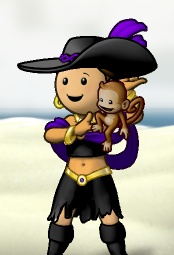 Ryannakjk is Captain of the crew Reality and was once a Princess of the flag Pay for Play on the Viridian Ocean.. She started her career as a pirate in the crew Reality where she formed a strong friendship with Rudebwoi. With her help as well as Tyra and Elmerspud he left Reality and formed RealityUK which was well on its way up the Crew Rankings when they were asked to take Reality over with Rudebwoi as Captain and Ryannakjk as First Mate. Reality became the #1 crew on the Viridian Ocean and was well known for its daily WF pillages Naved by Rudebwoi and XOed by Ryannakjk with the help of thier devoted crew members and hearties. Ryannakjk took over as Captain of Reality when Rudebwoi became busy with his daily "real life" and 6 months later tired of questions moved on to start a new crew where he could not be bothered by the daily needs of a large crew. Reality left the political rings for a less dramatic pace. Ryannakjk enjoys her tight smaller crew now and has once again found the joy of puzzling and working with crew mates and hearties to find the joys of the game again. Ry as most call her has never looked negativly at her past in her crew or flag it is what made her invest so much of herself and time into the game and has helped to form the bonds of friendships that she still has with many of her crew mates and hearties. Viridian Ocean.