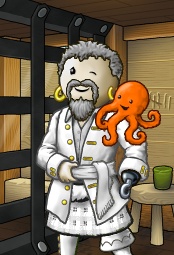 Commonly found on Emerald Ocean, currently an officer of the crew 'Some Crew'. Favourite activities: hunting monsters, especially Cursed Isles trips with friends, rumbling, playing spades and distilling. Does not enjoy duty puzzling without tokens, except for gunning; scared of battle navigation.

Started playing Puzzle Pirates in June of 2007,on the Hunter ocean, quickly growing very fond of the game. Early days are a mystery, only as much is known as that he found home within the crew Surfing Dolphins, moved to Twelve Pack. As members of the crew disbanded, Rudis joined the ranks of Intoxicated under leadership of Misan and Alva, originally in the flag Natural Disaster, followed by Happy Hour and Private Party. In coming years friends in Intoxicated one by one retired, so Rudis moved on to the crew of fellow monster hunters, which from time to time changes it's name.