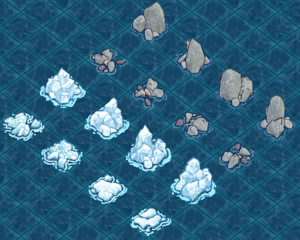 Rocks are one of the special tiles in the sea battle board. Ships can never pass through spaces containing rocks, and those attempting to do so will take collision damage and remain where they are. However, ghost ships and the black ship can freely pass through them.

There are two types of rocks: tall rocks, which block cannon fire, and small rocks which can be fired over. The two types deal equivalent damage to a ship that collides with either one of them.

During the pirate winter, when the oceans freeze over, the rocks become icebergs. As with regular rocks, there are two types of icebergs, with the large ones blocking cannon fire and the small ones which can be fired over.