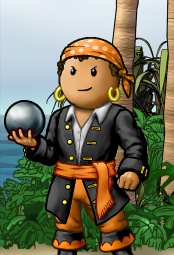 (aka Marz) Birthday on 30th October. Very orange. Been playing on Midnight since May 2004. In Dioses Y Demonios, Superlemon Krakatoa. Governor of Ostreum Island, again.

Rmarzbarr has been the owner of a ship stall, an IM shoppe, a tailoring stall and an apothecary stall. All of them 'prospered' apart from the ship stall. A tip for the entrepreneurs: stay simple - an apothecary just carting blood can make a lot more poe than... anything! Rmarzbarr currently owns, but does not manage, Lemon Balls on Ostreum Island and a tailoring stall on Vernal Equinox.

Ostreum Island, taken by Superlemon Krakatoa from Phoenix Reborn (after many governor changes and 'graffitti-ing'), finally fell to rest with Rmarzbarr at the helm some months ago. After a while Notorious Fandango laid their eyes on the island and Superlemon Krakatoa did not form a defense, but came back in a few weeks, putting Rmarzbarr back in the fort, forever to clink the abacus of tax.

Familiar tournaments come and go around Rmarzbarr and his closest attempts have been at swordfighting. After making it to the second stage of the 9th Black Death Tournament, Rmarzbarr could barely impale a sausage through tiredness so threw in the towel and went to sleep. Rmarzbarr made it to the final of one of the monthly familiar swordfighting tournaments on Midnight, but fell at the final hurdle due to his own ill judgement.

Submit a story to The Comedy Fish, or be burnt by bees.

In July 2006, Rmarzbarr hosted Balls or Brains with the backing of his flag, Superlemon Krakatoa, especially Akaterini and Oldin. Turnout was less than great, but fun was had all round.

Rmarzbarr's past crews, and flags, in chronological order: