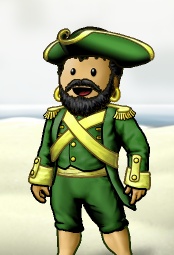 Reznor, named after the musician Trent Reznor of Nine Inch Nails, was fleet officer of the crew Shanghaied and belonged to the flag Notorious. He lived on Admiral Island on the Sage Ocean. This pirate has been deleted.

Reznor is a member of United Pillagers Across Sage.

Reznor's early pirating days were spent before Reznor even existed. Instead, he had another pirate named Hartley (created around fall-winter 2005), who joined just about the first crew that came to him, the Scuttle-Me Elmos. While there, he learned about the game and the puzzles. He never left the crew, but when he stopped playing Puzzle Pirates for a while, his pirate was deleted by the game.

On his return, a new pirate had to be made; after going through a list of musicians (which included Johnny Cash, Metallica, Daft Punk, and Yngwie Malmstein), a name was chosen and Reznor was born. The newly dubbed pirate Reznor had little trouble getting back on his feet as he still remembered much about the game, and quickly relearned the puzzles and took in the changes in the game.

Soon, Reznor was recruited to Greed's Ambassadors by senior officer Emep, and never looked back. The members of Greed's Ambassadors taught him, and helped him become a better pirate. Eventually Reznor recieved the rank of officer, but soon after he had to take a break from the game.

After coming back for a short period, he had to leave for a second time. On his return, Reznor immediately did his best to improve his puzzling skills and to learn to lead a successful pillage. In this, Reznor found a duty puzzle to add to his favorites, Navigation. After leading many pillages, and joining fellow members of Greed's and Notorious on theirs, Reznor achieved the rank of fleet officer.

After a certain amount of time, Reznor took another break from the game. In a combination of RL cercumstances, other games and his somewhat cyclic behavior, Reznor started comming on less and less until he wasn't comming on much at all. He would occasionally return for a short bit, but would find himself "out of the loop" because of what he had missed. Then, recently, he started comming on more and more. He immediately noticed some changes in his crew; firstly that they had left Notorious, and second that some of his hearties had broken off into Shanghaied. Reznor made a tough decision and left the crew that he loved and had been with for so long, to join Shanghaied, still keeping Greed's in his heart.

More recently, Reznor took a break from the game that resulted in his deletion. He created a new pirate with the same name which was later deleted also.