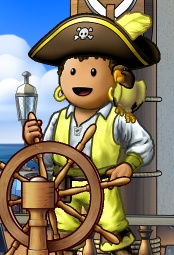 Rantz won a Brown/Yellow parrot called Zoey in the Draw the New Oceanmasters! of June 2005 on Midnight.

Rantz joined the game sometime in 2005. He was quickly recruited by the Dastardly Deviant Devils, a now defunct crew of the flag Looterati. He climbed the ranks quickly, and wasn't part of the game very long when he was encouraged by his crew and flag to submit an entry into the Draw the New Oceanmasters! forum contest. He went to work designing an entry, and upon the completion of the contest, he was awarded with the top prize, a familiar. During the summer of 2005, his crew was folded into the ranks of the Far Too Jolly Rogers, still of the flag Looterati. He resides there today as a Fleet Officer, not having logged in since December 14, 2005.

His typical outfits were designed to be remniscent of a banana, further reflected in the coloring he chose for his parrot familiar prize. His winning artwork for the "Draw the New Oceanmasters" contest was used by the new wave of oceanmasters for their avatars, following the contest's completion.