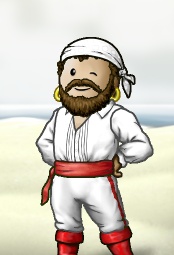 Popsdaname is a senior officer of the crew The Drunken Sailors and a member of the flag Raging Rebels. He sails the Sage Ocean.

He loves Treasure Drop, Battle Navigation, Bilging and Shipwrightery. Popsdaname has a bungalow on Admiral Island, a cat named angel, a rat named SUPA BEAR and a sloop Dependent Sunfish.

Popsdaname prefers small ship pillaging when he is battle navigating as he has had some bad runs on big ships (and it is cheaper if one messes up).

He started as a greenie on the Sage Ocean where he quickly learnt the skills necessary to survive under the rule of Sharkiez. He practised the basics until an offer was made by a pirate named Zulu where he joined The Drunken Sailors and quickly reached the rank of officer.

Popsdaname quickly learnt how to battle navigate and ran many succesful pillages earning the trust of his fellow crewmates with his outstanding effort and determination. Not that long after he was promoted to fleet officer where politics became a part of his piratey career. The crew was a formidable one for many a year until a chance at being royalty with Illium Eternae was too good too refuse. He was drowned in entanglements of war, alliances, crew issues, events and had to pillage as well. Illium Eternae was sold and The Drunken Sailors hopped from flag to flag searching for the right one.

During this turmoil Popsdaname sank out of piratey life and backed out of the game where he found a life outside. Popsdaname stopped playing for a time due to being drowned by real life issues. A few months later the pirate known as Popsdaname was rebeorn and with him a new determination. Early in 2007 Popsdaname rose to take his place in the crew that had withered without him. He saw the need to regrow the once mighty crew and restore its glory. Popsdaname made a stand and started pillaging frequently to try to save the dying crew.

After an extended break his account was deleted due to inactivity and has continued under the name of magicshroom from April 2009.