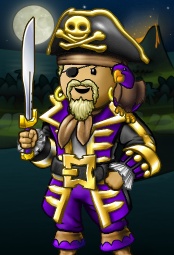 Plankmeister, is an admiral in the Armstrong Island Navy in the Canis Archipelago. He is a senior officer and navigator of the crew Just for Fun of the flag Midknight Sun.

He maintains alts under the same name on all doubloon oceans to assist in blockading efforts.

After jobbing as an independent pirate with numerous crews, the spirit and discipline he saw evidenced in Knott Serious attracted his interest. It was a crew with high standards for promotion and no toleration for lazers or mouthy jobbers. Senior Officer Valeene officially joined him to the crew and thus began his service to the Illuminatti (Knott Serious was in Illuminatti at that time). The rigorous standards for promotion to officer forced Plankmeister to become a better puzzler across the board. He rose through the ranks from pirate to senior officer, demonstrating loyalty and crew commitment. He also became a lord of the flag Illuminatti. Because of the atmosphere of discipline especially enforced by the impetuous Ambur, Plankmeister began to dance when any lazer or whiney greenie received a swift planking. Thus began a great tradition ... once known far and wide.

On March 1, 2010 Knott Serious reached the difficult decision of joining Prestigious to form the flag Against The Current, of which Plankmeister was a founding lord and soon prince. Though the crew was no longer a part of the Illuminatti, Plank maintained close relationships with it's leadership, ever committed to the defense of Doyle Island. His service and loyalty were rewarded with the deed to the weavery bazaar on Doyle. His sheep, Outlaws, is the famous black sheep that once patrolled the shores of Doyle. It was a gift from Dawnrenee, who had served as governor until the departure of Knott Serious.

Eventually, the drama and stress of royal life within Against the Current grated against Plank. One leadership crisis resulted in the resignations of three royals: Plankmeister, Knottydog, and Mumms. Though a crew reorganization was attempted, Plank realized that it was time to fly solo. Therefore, he joined full time the crew/flag he had started previously for a foraging business.

Lazers -N- Nubs was a moderately elite crew who preferred a more mature and peaceful gameplay. They were affiliated with the Illuminatti, although not a formal member of the flag.

After nearly a year of solitude, Plankmeister officially returned to the Illuminatti by replacing his alt "Boochmeister" with his main in Poseidon's Outlaws. After this move, he was approached about serving as flag royalty and served as Governor of his beloved Doyle Island. The black sheep Outlaws patroled the shores of Doyle again! Sadly, Doyle was given away in an event challenge, thus ending not only his governorship, but also two and half years of holding the deed to the weavery bazaar. Over time, he also held governorship over Ilha da Aguia and controlled the deed to the Bank at Pukru Island.

In an apparent confusion over his active status, Plankmeister was unceremoniously demoted from Illuminatti royalty. He had been mainly playing on alt characters during the previous month. The slight was not taken well, and so Plankmeister looked for a new home, even posting his availability on the forums. After receiving several offers, he decided to stay close to home, joining alliance members from the Midknight Sun. He had grown to know and respect the folks from Just for Fun and MKS through many hours of joint blockade action.

Plank's interests have developed over the course of his gameplay. When he mainly XOed for Knottydog a song was written set the tune "The Joker" by the Steve Miller Band:

Cause I'm a Planker; I'm a rigger; I'm a gunner; and I'm a digger; Got those skellies on the run.
I'm a joker; I play poker; I'm a midnight tokener; Watch me dance as I plank someone...
Oooo ooooo. Oooo ooooo.'

Since those early days, Plank has matured into a bnaver of his own. He enjoys running Imperial Outpost raids, blockade navving, and loading Junks for profitable pillages.

Plankmeister proudly maintains a completed collection of all Emerald-released starfish.

This collection was on display at the Pukru Bank, but is currently being held privately.