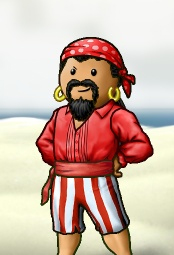 Pizzahutpete sails the Cerulean Ocean. He is a Senior Officer and Navigator of the crew Boochin' Drunks and Prince of the flag Super Awesomeness.

Pete began his life on the Cobalt Ocean in January 2007, coming to Puzzle Pirates through miniclip.com. His first voyage with a crew was with Armychick - a fleet officer in the Boochin' Drunks, who promptly invited him to join the crew. Within a week, his sailing, bilging and carpenting skills had elevated to the point where he was promoted to officer (having caught the bug and subscribed.) Still unsure as to what was actually going on in game, he bought a sloop and starting booching his way across the Onyx Archipelago. He was promoted to fleet officer immediately following his first blockade as a battle navigator where he gallantly sank while bnavving a war brig, and senior officer (appropriately) on St. Patrick's Day. He took over the post of First Mate on the departure of the incumbent to another crew. He gave up the post of First Mate when he assumed the post of Royal within the Flag. The crown was passed to him by Jakaubrey, the previous King, immediately prior to assuming ownership of Ansel Island. In 2013, he subsequently passed the crown to Steveb.

Pete is the proud owner of the Brig Game Hunter and Trireme Sleeps Tonight shipyards, Drunken Monkey Distillery, Me Tartan You Skein Weavery, Pythonamels Apothecary, and Jungle Gym Iron Works on Tigerleaf Mountain; Tour Elura Loom and Tier nah Grog on Fintan; Athena's Arts on Labyrinth Moor; Strange Brew, Blinded Me With Science, and Dark Side of the Loom on Napi Peak; Needle This Needle That on Tinga; as well as numerous stalls across four archipelagos. For years, he actively participated in just about any blockade or flotilla that came around; however, with the decline in ocean populations and the difficulty in filling ships of any size for other than Atlantis, he rarely attempts such voyages. Currently, he can most often be found running commodities between the archipelagos, and arguing with flag mates about the merits/detriments of foraging.

Pete currently serves as the Governor of Ansel Island in the Onyx Archipelago.

Blockades as a staffer