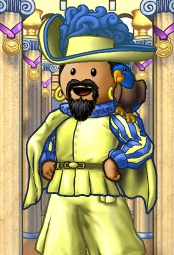 Peteypirate is an alt of Bauds, and a fleet officer in the same crew 'Scupper Me Booty' of the flag 'Rodger Me Hearty' on Cerulean Ocean.

Peteypirate has mostly been in Scupper Me Booty. He enjoys every puzzle and every activity. He also posts frequently in the forum and is highly active, also as Bauds.