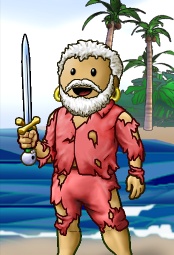 Peghead, ace software engineer, is one of the Ringers. He does lots of the computational stuff.

Peghead is known for lurking around with a yellow name and sometimes playing hearts.

Many old-timers will remember the hilarious booch regarding the chat filter back in 2003. When the filter was being worked out, Peghead made a minor flub in the code, reversing the direction of the chat filter. So for instance, instead of a certain unmentionable word coming out 'scupper', typing 'scupper' would make the unmentionable word come out. As words such as booty, bilge, mast, tart and barnacle are actually words that see common usage in piratey conversation as well as words that result from said filter, this flub had chaotic (although highly amusing) results.