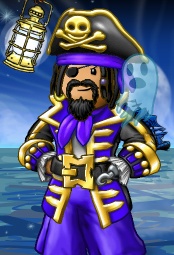 Orbsus is a senior officer and monster hunter of the crew Fail Whale in the flag Puzzleholics Anonymous.

Orby really can't dress himself, but he can be found running a HS when he is not working. He surrounds himself with fine people though and his pet panda bear.

On the 21st of April 2011 Orbsus became the first person on Viridian and the second over the entire of Puzzle Pirates to find the Ghostling Familiar that can be found in a spectral chest in the Haunted Seas.