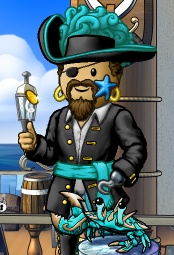 Oosteve Plays on the Viridian Ocean.

When anyone thinks of poker... the first thing they think of is Oosteve. Some call him the Silverdawg of poker, as he is ultimately the most dominant force Puzzle Pirate poker has ever seen. With his reading ability, being able to precisely measure the percentage a character bluffs, swift calculation of odds, and EXTREMELY fast banking skills, it looks like no one will ever be able to stop, or catch up to the mad man.

Most importantly, unlike 99% of high stakes poker players, he has an eyepatch to cover up his eye infractions that basic players reveal.

His success has no end in sight.

Oosteve has possibly developed the only perfect scheme in the game of poker. He buys in for 50,000 Pieces of Eight, waits for the precise moment where:

all 3 of these factors collide. Some call it the "Perfect Oosteve Onslaught" (or "poo"), and all the poker players know: When Oosteve calls, say goodbye to your hard-earned PoE.

Between hands, it is noted that Oosteve is one of the greatest philosophers of the modern era. His words of wisdom are beyond the average mind's comprehension, but with careful analysis they can be interpreted and have been proven to change the lives of others dramatically.

Baur says, "What do you look for in a GF? Looks or personality?"

Oosteve says, "any guy that says otherwise is telling a lie."

Mrc says, "STEVE IS A PROPHET OF WISDOM!"

The man has already surpassed the greatness of Plato and Socrates, as he has also clearly defined the meaning of life:

Oosteve says, "to find as many hot chicks as u can before u die"

At this rate, there's no telling what the man is going to philosophize. He's mastered poker and life-- not an easy feat by any means. It is only a matter of time before Cleaver_(pirate) looks to Oosteve for advice: in Poker; in Life; in Females.