Hauling up treasure from the deep blue sea is a favorite pirate pastime. But beware! Don't get too greedy. Yer crew will have to balance the health of yer vessel with the lure of all those gold coins and gems.

Treasure Haul is a simple and fun puzzle played to add treasure to a ship's booty. During the puzzle, each player swaps coins vertically to make patterns of three or more of the same coin type. Combinations of patterns generate a higher score, adding more booty to the ship's hold.

When to Play Treasure Haul

In those cases, the Treasure Haul puzzle should start automatically.

On Subscriber and Doubloon Oceans only, Treasure Haul is also available...

In these situations, in order to start the puzzle, a ship must find the downed vessel or monster and stop adjacent to or on the square marked by the sunken ship's hull. This includes squares that are diagonally adjacent. If your ship is directly over the wreck, the speed at which treasure is hauled is increased. At the beginning of the next navigation round, each player on the ship will see a notice in the "Ahoy Panel" allowing them to start hauling treasure. 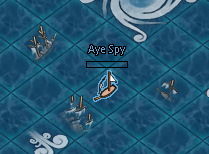 Players on a ship that ventures more than one square away from a haulable wreck will be forced to leave the puzzle. The puzzle will also end if all of the booty in the sunken ship has been retrieved.

The loot available to be Treasure Hauled is determined by the difficulty in obtaining access to the wreck (i.e., defeating a Brigand for an expedition tip, or downing a sea monster) or in the case of a player ship, by how much booty they were carrying. The amount of treasure therefore varies based on the target selected for hauling.

However, it is important to note that the rewards available from hauling in a sinking situation are substantially higher than when engaging in an activity where your ship is not at risk.

How to Play Treasure Haul

Treasure Haul is a match three game. Using your finger, tap a coin and swipe it either up or down to swap positions with an adjacent coin. The goal of the puzzle is to swap pieces to create links of three or more of the same coin type, either vertically or horizontally. Each time a link of three or more is created, those coins are hauled on board, adding to the ship's treasure.

As in other puzzles, combinations are possible based on both the initial swap and the links that are created after the first set of coins are pulled aboard. A player scores more (and earns more booty for the ship) from combinations than from single matches of three of the same coins.

In addition to the normal coins in Treasure Haul, players will also sometimes see rubies and emeralds on the board. These two gems are special pieces that, when tapped will cause a special move to occur.

Emeralds and rubies are both useful pieces to open up the board. A lucky player can also sometimes arrange the gems so that their effects are chained together. This can be achieved by triggering a gem while another gem lies in the horizontal, vertical, or diagonal that the first gem affects.

Yer pirate is shown above the Treasure Haul board. It is possible to estimate the total treasure pulled aboard based on the size of the gold pile accumulated behind yer smiling face.

Treasure Haul is a good way to earn pieces of eight for the whole crew of a ship. However, it is important to remember that when a pirate is hauling treasure, other important duties may be overlooked. Brigand King blockades are always sinking events. There are significant risks to allowing the other duty stations on a vessel to be left untended. When engaged with a Brigand King, the captain should think carefully about when to man the duty stations and when to haul treasure; a ship with no sailing tokens or that has filled with bilge is a ripe target for revenge!

It is also important to note that hauled treasure is divvied with any other booty. This means that a ship must get to port in order to divvy the treasure earned through this puzzle.