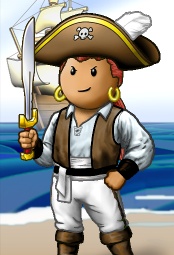 Nunny is a senior officer of the crew Great White Dugongs. He is also prince of the flag Shadow Knights. He sails the Viridian Ocean.

Nunny originally began playing on April 15, 2005 but the character was deleted after an extended absence from the game. He began playing again months later.

Nunny was captain of the crew Murderous Maniac's from late 2005 into 2006 after the prevoius captain, Maniacmike, left the game. Once Maniacmike returned, the crew was disbanded and Nunny and Maniacmike moved from crew to crew.

Nunny eventually settled in the crew DREAM CATCHERS of the flag Dreaded Dream Makers. After flag disagreements, Nunny left and joined the crew Knight Stalkers which was comprised of many former Dreaded Dream Makers members. He remained in this crew until 2007 when he founded the crew Lords of War. This crew merged into Great White Dugongs in late 2007.

Comment Which Nunny Should Not Take Seriously :P (And Its True :O)

NUNNY IS NUTTY! And the Lord knows why ...

Cakes and muffins, flour and dough...

NUNNY IS RANDOM! This the Lord knows.