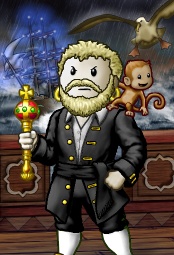 Mtdizzle is currently active on the Obsidian Ocean.

On the Obsidian Ocean:

Mtdizzle originally started in July 2005 on the Viridian Ocean under the name Magicaltouch, where he became briefly ocean famous in 2008 while studying under the tutelage and guidance of his mentor Antix while serving as a pirate in the crew Rated Arr.

Mtdizzle is now actively found on the Obsidian Ocean following its opening in 2017, he linked back up with his good friends and buddies Antix and Martobain whom he considers his closest personal friends.

Although becoming briefly famous for being banned for one day in 2018, Mtdizzle is most commonly known for being the real life brother of the considerably more successful Pasteyman.

Mtdizzle is a member of the crew Inglorious Basterds and is prince of Guerrilla Warfare where he spends most of his days referring to people as “hon” to be condescending.

Pasteyman is a familiar face on the oceans poker tables, and often found sailing for his crew during frequent sinking pvps.

On July 23, 2018, Mtdizzle stood on the docks and watched as his baby brother Pasteyman became governor of Melanaster Island on the Obsidian Ocean, after successfully assisting with leading his flag Guerrilla Warfare to victory at the Melanaster II blockade. Guerrilla Warfare were able to defeat their formidable opponents Consider it Sunk three rounds to zero.