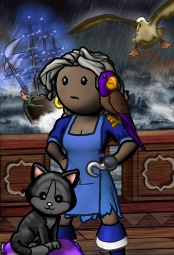 Monopolist was a pirate on the Sage Ocean and later the Emerald Ocean. This pirate has been deleted and another with the same name has been created.

Monopolist's love out of all puzzles was Swordfighting, to her it never became uninteresting however she did also enjoy some other puzzles, this included Alchemistry, Shipwrightery, and Treasure Hauling. She had learned how to swordfight from other puzzle games, this included Super Puzzle Fighter Turbo which was developed by Capcom in 1996, immensely similar to Swordfighting although sword strikes could not be sent to rivals. As the puzzling continued, she persevered to try out different games and also tried to understand them in more detail than how they were perceived.