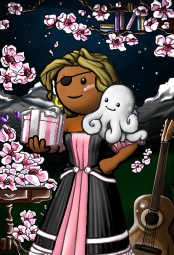 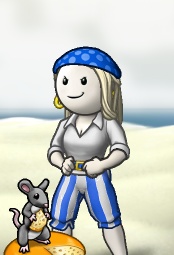 Kitty is Senior Officer and Card Shark of the crew Purgatory on the Emerald Ocean. She is also princess of the flag I Can't Hear You.

Lurv was senior officer and drunk of the crew Nemesis Program on the Emerald Ocean. She was also princess of the flag Black Bones. This pirate has been deleted.

The history of Kitty is something that has baffled the few people who have come to know her. A life full of secrets that she held onto at one point, took a turning point on February 17th, 2012. . .

Her adventure started sometimes in mid-May 2010, when she decided to join Puzzle Pirates under the name of Lurv. From there, she joined many crews, and even settled into having her own, even though she didn't really like to puzzle much. She just liked being her own boss.

Soon after joining, she brought her best friend into the game; which made it all the more fun as she could talk to someone who she atleast already knew. But sadly, all fun has to come to an end, even in such cases.

By the time September rolled around, a lot of things changed in her situation, both in game and in real life, and she decided to take her leave.

And The Clock Struck Twelve. . .

Five months went by, when her friend approached her with the unthinkable. "Join me on Puzzle Pirates again?" - A question no doubt in Lurv's mind she wouldn't accept. However, with several previous declined offers later, she accepted to rejoin Puzzle Pirates, under one condition: She must have a new name. She could not be Lurv any longer. And with that, a new name and identity formed for Lurv. One that would bring her more then she could ever imagine; Extinction.

On February 20th, 2011, Extinction took her first step into Sage Ocean. Seeing all the names she previous knew before, brought comfort but equal sorrow for she knew those who never cause her any trouble could never know who she once was, thus ending any friendships she ever had.

Off the bat, her and her friend started their own crew again, allowing them to do as they please. Extinction started to puzzle, taking Carpentry as her forte. She quickly achieved Master in it, and was completely satisfied, knowing she could do the puzzle at ease.

Later on, she helped acquire her best friend her first familiar, a Tan Monkey, for her birthday - a gift she will always take to her heart and a personal goal met. Soon after, she herself obtained a Navy/Grey Serpent, who she cherishes to this day.

She also has access to other familiars, those being a Coloured Monkey, Dark Grey Skeletal Monkey, and OCL White Octopus - who of which she wears most often. ♥

In December 2011, Extinction took an emergency MIA and did not return until February 2012, missing the merge of Sage and Hunter. Upon her return, she was greeted most welcome by her friend and everything resumed as normal.

As her one year approached, Extinction was approached with yet another unthinkable question, although this time, it left her to ponder the same question over and over again - "Should I?"

After a lot of thought, pros and cons, Extinction finally made her decision. . . Lurv would be awaken from the dead, and Extinction would be put to rest.

And as of February 17, 2012, Lurv had been alive and well. At some point, Lurv made the decision to once again sink Lurv into the depths of the ocean, as a rare opportunity came about. With the introduction of Rogue Marks, a bit of PoE and patience, Lurv was able to obtain her utmost wanted name since she began her Puzzle Pirate career many moons ago: Kitty.

And as it stands, Kitty roams about the poker tables, laying upon willing player laps and purring contently.