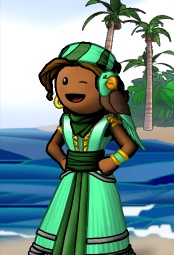 Ligeia is a pirate on the Cerulean Ocean and has been playing since November 17th, 2005. She is currently a member of the crew Going Down of the flag Dark Lords.

Ligeia washed ashore on Alpha Island on the 17th November 2005 where she ventured through a few crews before finding her niche in Criminal Instinct. She remained in that crew, rising to the rank of senior officer until she was asked to move to the newly formed To Kill A Kipper crew to help it grow and become a crew in it's own right. This crew had started as a place for the teens of Criminal Instinct to move. The Captain of the new crew, Kinkat stepped down and appointed Rollygoger as captain in her place in April of 2006, and Ligeia was promoted to senior officer. A few months later, Rollygoger decided to leave the game, and promoted Ligeia to captain.

With discussion from her senior officers, Ligeia made the decision to take her crew out of DeathDrakkar in order to make a new start with a few good friends from other crews. Thus the flag Malum Discordiae was born.

A few months later, Ligeia made the decision to pass captaincy of To Kill a Kipper to Mrslovett, and in discussion with all senior officers, they left Malum Discordiae to join the newly reformed Avast Party People.

Ligeia joined the flag Blighted in June, 2007 following an OM run event in which she took part with fellow members of Vitamin Sea. They ranked 3rd in the event, and each member won a baghlah. She has been in Vitamin Sea ever since.

She has recently made the jump over to the Malachite ocean where she is a senior officer in the crew Styx and Stones.