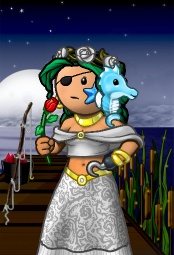 Lacusclyne is senior officer of the crew Et Cetera. She joined Puzzle Pirates October 29, 2005, on the docks of Wensleydale. She resides at her lovely manor on Admiral Island with Amnesty. She enjoys collecting various trinkets, but her favourite is her familiar collection that currently holds one of each colored familiar.

Prior to the ocean merge, this pirate could be found on the Sage Ocean.

The first crew she joined was Balls of Fire, which was once a powerful and majestic crew led by their captain, Cannonball (also the monarch of the flag Wings of Fire). Since then she hasn't been far from the crew, working her way up to captain. Once or twice she has temporarily left the crew but has always come back. She couldn't leave the people there; her family/friends there were too important to her.

After a leave of absence, during which she was unable to access Puzzle Pirates, she returned to a very different crew. Cannonball had left, and had been replaced by Ladykay. Soon after, the crew left its original flag and became independent. The crew name was also changed to Cobra, after a suggestion by another crew member, Corsar (who has also quit).

After Ladykay stepped down, Cobra joined the flag Heaven's Demons, lead by their monarch, Lipsy. Lipsy was a former royal of the flag Wings of Fire, and senior officer of the crew Balls of Fire. Also during that time, 4 of the loyal fleet officers of Cobra, were promoted to the rank of senior officer. These 4 were, Elsietemares, Lostillusion, Tenijs, and Lacusclyne herself.

Zartan demoted himself to senior officer, then decided he could not fulfill this rank either. He is currently a dormant fleet officer in the crew Cobra. This caused a bit of turmoil; they needed a captain. The royalty of Heaven's Demons (Cobra's flag) and the senior officers of Cobra held a meeting. They decided to appoint Elsietemares to the rank of captain. However, since Elsietemares' primary language was not English, it was decided that he would step down. The royals and senior officers held another meeting. They still needed a suitable captain. Finally, they decided that Lacusclyne should become the captain of Cobra.

Since Cobra was merged by First Mate Winner, Lacusclyne moved to Your Worst Nightmare where she assumed the rank of senior officer. Your Worst Nightmare began to fade, as time does ware down crews, and she's joined and created numerous crews in the process including Privateers, Deadly Desire, Death Wish, The Coral Reefers, back to Deadly Desire, and resided as captain of Da Nubz until July 24, 2011 when Xzavia and her decided to make a new crew: Soul Secret. Since then, both Xzavia and Lacusclyne retired for periods and passed the crew onto Nickbush. She wandered from crew to crew, and ended up with some old friends in Challenge Accepted.

As time passed, she found that Challenge Accepted was not for her. She joined her awesome portrait buddy, Amnesty, at Et Cetera where she is now a senior officer.