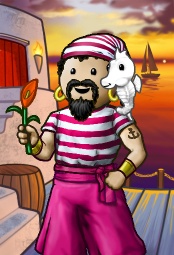 Kyubi is a pirate on the Sage Ocean.

Kyubi Started playing in 2010. He washed up on the shore of Admiral and begun jobbing for various crews taking a liking to bilge and perform Gunnery. He wound up in a crew called Rabies lead by Captain Bristolkid. Starting off as a pirate Kyubi worked his way through the ranks and after some time showed leadership and made it to the position of senior officer. After Bristol's original first mate left the crew, Kyubi was soon promoted to first mate and co-captain of the crew. However one night as Kyubi slept the crew was sold, when he woke up he left Rabies.

After that Kyubi found himself in the crew Nasty Drunks after following a friend there, he begun a foraging business and expanded his knowledge of the game and begun earning poe and expanded his fleet getting ready to make a crew. After he was satisfied he had gained enough knowledge he set off and made his first crew Crush 'N' Crumble, The crew attracted a lot of members and quickly shot to the top of the Crew fame list. He first joined Jigsaw Tessellaters which he learned the ropes of being a royal. Soon after he left the flag and started his own. The flag just consisted of his crew and was not very successful. Towards the end of 2010 Kyubi was forced to retire because of exams in real life. He handed over his crew to a friend and retired in his mums crew The Titans.

When Kyubi finished exams he came back and remained in the crew The Titans working his way up to Senior Officer became a officer trainer and an active part of blockading within the flag. After some time Kyubi created the crew Pursuit Of Happiness but remained in the flag Olympian Armada starting off as a titled member Kyubi made it to be a royal of OA and continued to call OA his home fore a long period of time. However after a few events, Kyubi traveled through various flags before making his own. The flag is Called No Apologies and is currently blockading all over sage ocean. Kyubi looks forward to his future in Puzzle Pirates and looks forward to the new adventures with his flag and friends. In 2012, Kyubi was banned for an unknown reason.