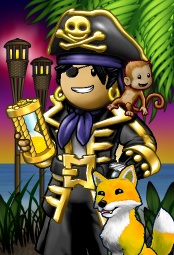 During his first 8 years of pirating, he was an independent pirate and only worked on improving his gameplay and his navy rank, until he finally reached his goal of admiral. He also went onto gain several ultimate ranks in many piracy and carousing puzzles, before eventually settling down with a group of friends in the crew Suspicious Activity before he went onto his first year of college.

He was well known to go on long pillages and conqueror expeditions and participate in all kinds of blockades. Generally, he was a calm and under-the-radar pirate. This was until he started earning millions of PoE from wagering in SFs, participating in tournaments, and generally getting his name out there by being as active as possible. He also eventually bought his own gallery in May of 2018, where he is currently trying to furnish it with his 5 roommates and friends.

As of May 2018, he has been actively trying to memorize the entirety of the Emerald Ocean and has been working on it with a steady pace.

These days, pirates will usually find him either in pillages, blockades, tournaments, fighting skeletons or zombies, going on BK Hunts, and the inn just lazing about and chatting with fellow inn-goers.