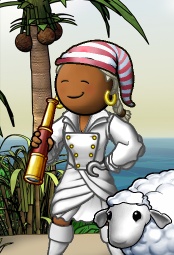 Jumpinjobean is the captain of the crew Thieves of Mercy, and a princess of the flag Prestige on the Sage Ocean. She has been playing far too much for too long, but still has a lot of fun.

Anything else is now getting lost in the mists of time...