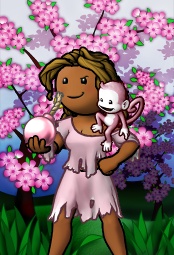 Good morning ladies and gentlemen, welcome to this barnacle show.

We gon tell you a little story, now we ax that you sit back and not feel up on our legz. If you that ignant you need to go where yo came from.

The pastor for Macadamia Jubilation Congregation, also known as Julie, started on the Obsidian Ocean in 2017 when the ocean first opened. Julie followed her best otter friend Cem around like a puppy throughout various crews and flags before finally accepting her fate as a lone pirate. Julie created Obsidian's version of Guapo Papi where she is Captain and remains happy and drama free.

Guapo Papi crewbies come together to smile and laugh at other people.

Unfortunately, Julie is the only active member of Guapo Papi.

Julie is the first pirate to own an independently run (non flag affiliated) shoppe on Obsidian Ocean. This is also the first shoppe on Obsidian Ocean to survive through the rule of two different flags. Julie won the tailor shoppe in an event sponsored by Guerrilla Warfare in which she wrote an inspiring story of love and heartache between Antix and a blue octopus named Jandy. Julie and a real man named Prosperity run Nonsensical Nudity in such a beautifully harmonious, fun-filled way that their passion and zest for shoppe success has superseded literally anything good that has ever happened in the history of Puzzle Pirates.

Contrary to how this sounds, Julie is not a prude. She just appreciates a good story line when seeing breasts.

Julie is extremely introverted and scared of other humans, which is why she spends her time playing this ridiculous game. Her general disappointment in humanity makes her friendships that stand the test of time that much more special. (Pause for reaction)

Julie and Prosperity have been the very best of pirate pals since 2007 and coincidentally ran into each other on the docks of Port Venture when Obsidian opened. Prosperity and Julie get along because of their shared love of Battlestar Gallactica, their identical personality type of INFJ (The Advocate - the rarest personality type in the world), and their complimentary interests of acquiring power as quietly as possible (Prosperity) and acting like an insane pirate while also cowering in the corner hoping no one notices her (Julie).

Julie has an impressive supernatural ability to buy things regardless of how much poe she actually has.

Her super power has assisted her in building her own Scooby Gang based of the hit TV show "Buffy the Vampire Slayer".

If pirates are interested in learning more about this brilliant TV show, Julie recommends that they start with season 2 because Angel is a huge pansy douche that pirates do not need to waste their time getting to know.

Service to the community

When bored out of her pretty little mind, Julie can be seen greeting random pirates as they arrive to an island's dock in a manner that can only be describes as "Tourette-like".

She recruits strangers in this quest as well and has found most people are all too willing to do very strange things with little to no explanation.

This rare communication between Julie and the outside world is without a doubt the highlight of Obsidian Ocean's existence.