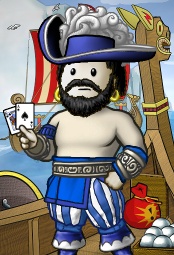 Iowned was once an independent pirate on the Hunter Ocean. However, his character has since been deleted, or has gone dormant.

When Iowned started his pirate career on the Hunter Ocean he joined a crew that he forgets the name of. He was later asked to join Muffin land, but he soon betrayed Muffin land. Iowned joined All for Rum, where he had fun in the pillages, but not in the chat. He soon rejoined Muffin land as a pirate. Iowned later joined The Chosen as an officer. This crew got to Eminent fame in just 14 days! He later joined OBsession as an officer.

Eventually, Iowned got really bored, so he made his own crew. He named it Banda De Sangre. Last anyone heard from Iowned, he was the captain and strategist of this new crew. He was also a prince of the flag NO BULLCRAP, and a lieutenant in the navy.