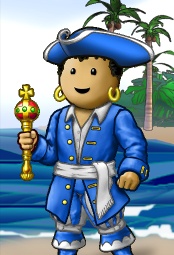 Hawkinsjr was a senior officer of the crew, La Vida Loca. He no longer sails the oceans.

Contributions In Most Recent Time

Hawkinsjr has a great deal of experience with the smaller crews of Viridian. An experienced battle navigator, he piloted a ship during the first blockade of Prolix Purlieu. He is also an active member of Skellie Hunters Across Viridian. In alliance conjunction with Antheas, Star Explorers, and The Armada of Angels, Hawkinsjr has been able to gain lots of blockade coordinating experience. He has admiralled more than seven blockades with his flag helping as faithful allies, and mercenaries.

More recently, Hawkinsjr had been lying low, waiting for another opportunity to rise to royalty. He was working heavily on improving his ratings and experience. He wished to once again administer either admiral, or blockade co-ordinating duties to either his flag, or another.