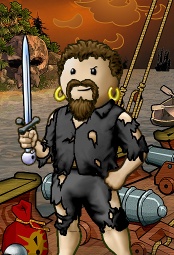 Greyhawk is a senior officer of The Jolly Rogers, and a member of the flag Veracious Fairytale. He sails the Sage Ocean.

Greyhawk started his pirate life as a cabin person in the crew Phals. His real life friend Maniac was his great example in the game, and Greyhawk learned a lot from him. After a couple days Greyhawk got promoted to pirate. And from that point he kept climbing the ladder to fleet officer.

A couple months later, Greyhawk joined The Jolly Rogers. He became senior officer there and still enjoys being in the crew.

Anounced in crew chat to be inactive till e finished his exams.