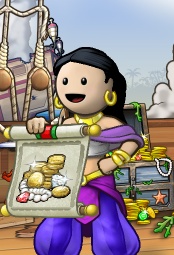 Godiva is a senior officer of the crew Arctic Revenge and a member of the flag Utopia.

Godiva joined Malachite as soon as it was discovered on May 2008 where she decided to remain an independent pirate until she meets Raindoggy and decides to join her small crew Glitter and Doom and the flag of Whirled Peas.

In September 2008, Godiva joined the newly created crew Harlequin still under the flag of Whirled Peas.

Supported Kamuflaro on the creation of the flag Utopia. Due to Utopia's war and alliance views, she tries to maintain good diplomatic relations among fellow pirates of various flags in order to keep a constructive involvement for future alliances.