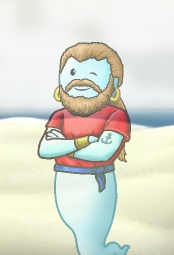 Funkbob is senior officer of the crew Draconic Destiney and a Member of the flag Ice on the Emerald Ocean. Prior to the ocean merge on January 31st, 2012, he played on the Hunter Ocean.

the first crew he was in was royal assassins brigade - the best crew around then and they helped him get all the way up to SO. then he later moved on to strike - which he shared with his best friend Wagbo. that crew then merged with draconic destiney, and then he became captain of his own crew after just 6 months called EMINEM. EMINEM merged with DD as funk felt he could no longer keep track of it all. then STRIKE was recreated and the captaincy was passed onto Wagbo and Funkbob now still goes over there to help sometimes.