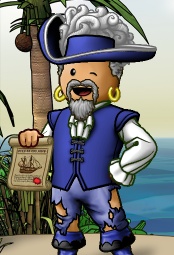 Falkenberg is an Island Designer and Captain of the crew Falkenberg's Legion of the flag, Widows and Orphans on Midnight Ocean. Falkenberg is a Role Playing character based on the fictional John Christian Falkenberg III from the CoDominium Universe [1] by Jerry Pournelle. A former Space Marine commander turned Interplanetary Mercinary when her unit was disbanded. No one quite knows how she wound up in the 17th Century Caribbean. Since only a few other members of Falkenberg's Legion are with her, she is treating it like a vacation from the rigors of running a large mercenary outfit.

Falkenberg began playing on February 20th, 2005 on Viridian just two days after it opened. She was involved in the early history of Infierno De los Diablos after following Seadevil from Devil's Playground. She was introduced to Midnight by a couple of long time players early on, and soon moved there permanately, after deciding she liked its culture, and payment model better. She rose to SO in The Enlightened Pillagers (defunct) in the flag Don't Panic. After having been through enough politics on Viridian and Midnight, she decided to move to Sinking Feelings of Widows and Orphans at a friends suggestion that they were quiet flag. She eventually moved into her own crew, Falkenberg's Legion, in the same flag to keep in touch with her freinds there. She is occaisonally active on Ice, as an SO in Ice Breakers of Arctic Circle.

Falkenberg is one of the winners of the Fantasy Island Contest. Her wonderful design work can be seen at Taniwha Island on the Meridian ocean (as well as on the retired/merged Malachite ocean).