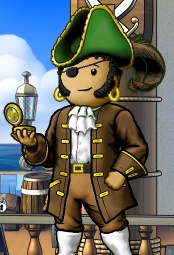 Elwoodj begon his piracy career in the late 2005 in Busschieters crew. When elwood was 2 weeks in that crew he decided that it was time to move on. Once he left the crew, he met Kingholland, with the crew the dutch revenge where he raised from pirate to the rank of Senior officer and first mate. One day Kingholland merged with dogs of war, but elwoodj didn't liked it there, So Elwoodj and Darkwiesten, who he met in Kinghollands crew, decided to start a new crew. That Crew named The dutch navy later merged into Make our Riddles and even more later renamed to Made out Rubies.

Make our riddles knew good and bad times, but Darkwiesten was buzzy with real life issue's so he handed over the crew to Elwoodj. Elwoodj served as captain for 1 year when also he decided to take a break. After a short period break he decided to start a freshhly and new crew with Diagon ,2 months later Elwoodj stepped down as captain and handed over the captaincy seat to Diagon due to Real life issue's. Diagon succeeded to make the crew from celebrated to illustrious fame in 1 week. Nowdays elwoodj is still in Dutch Assault forces as senior officer,after a some peroid of time elwoodj had to stop playing puzzle pirates due serious healt issues, after 4 months he finaly returned and decided to join his old pall leeperry in th ye olde flagg of riddlemakers where he joined as officer and finaly rose back up to fleet officer now days he fills his time with poker,buying ships and pillaging and some other stuff :)