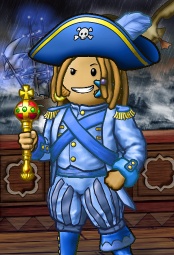 Drbobs is a senior officer in the crew All for One and is currently a prince in the flag Re-Arranged.

Although this pirate was created in June 2013, Drbobs existed from around 2005 (also known as Drbobs), but was purged and recreated.

Drbobs is a frequent player on the Meridian Ocean and from March 2014 started a YouTube series to get to one million Poe.