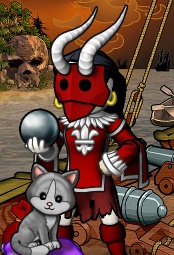 Despire was the current substitute captain of the crew Ageless Wave Riders and member of the flag Destroyers of Sage on the Sage Ocean. She lived with Aidthewound in his townhouse on Admiral Island. She doesn't really remember what day she joined, but she is sure it was in June 2008.

Her first pirate, which lived on the Midnight Ocean, was created about two years ago. After months of playing and not achieving anything, she left. She soon forgot about her pirate and became dormant. A day in either April or May 2008, she received a message that warned her about her pirate going to be deleted due to inactivity. When she tried to log on, it was too late. Remembering the good old days, she decided to start all over again, this time on Sage.

Her two favorite puzzles were Gunnery and Alchemistry. She hoped that someday she would get ultimate in both of them.

Despire was a Sea Monster Hunt tard. It was pretty hard to convince her to go on a pillage with someone, unless it was a hearty pillage. She was usually always busy.

This pirate has been deleted.